Standing in the Sun

This post is Part 2 of a five-part series on the birth and loss of my baby girls, Summer and Malia. A new part will be posted every Monday and Thursday.
Come back on Thursday, April 21, 2016, for Part 3.

The last time I posted somewhat consistently on this blog was three years ago. It was June 25, 2013. Our pastor was dying of cancer (he passed away the following day), but my husband and I were otherwise comfortable living our lives. At the time, we hadn’t experienced any major hardships together. Sure, we lived in a puny basement suite the first two years after we got married and my husband suffered from Cone Dystrophy, but we managed to move out of that shoe box and eventually bought our first home in August 2012, and my husband’s vision was still largely intact.

Time flies over us, but leaves its shadow behind.
– Nathaniel Hawthorne

Since the writing of that last blog post, my husband and I nearly separated (October 2013), his driver’s license was revoked because his vision no longer met the standard required for driving (June 2014), and he was unexpectedly let go from a job he had had for seven years (February 2015). All of these chapters in our lives demanded so much from us – emotionally, physically, and spiritually. Collectively, these experiences had been heavy burdens to bear. So when we found out on the evening of November 8, 2015, that I was pregnant, we felt like the sun had finally started to shine down on us again.

It all started on February 25, 2016, about a week before the nausea and vomiting, when I had a routine ultrasound that resulted in my first admission to the hospital. I had the day off and planned on the following day to be my last day at work. Though I was only 20 weeks pregnant, I felt like my body was telling me it was time to stop working. As much as I wanted to prove to myself and everyone that I could work until the very end, with it being a high risk pregnancy, I didn’t want to take any chances.

When my husband and I walked into our appointment with Dr. Wittmann, my maternal fetal medicine specialist (MFM) at the Surrey Prenatal Clinic, we expected nothing but the usual optimism from our doctor. However, we found out very early in that appointment that things would not go as positively. Not long after he started running the transducer across my lower abdomen, Dr. Wittmann found that my cervix had shortened a whole centimetre (from 2.5 cm to 1.5 cm) since my last ultrasound two weeks earlier, and that there was some funneling.

As soon as I saw Dr. Wittmann’s face as he moved the transducer around and looked intently at the monitor, I knew that something was wrong and I felt my heart start to race. A shortening cervix and cervical funneling were not good things. In fact, they are considered precursors to preterm labour. Since I was carrying multiples, I was at risk of it. After consulting with the high risk OB-GYN, Dr. Huckell, Dr. Wittmann agreed that I needed to be admitted. I can’t remember another time in my life when I walked out of a doctor’s office in such a haze.

As if Dr. Wittmann’s news wasn’t enough to cause distress that morning, I started having abdominal tightenings after I was admitted to Surrey Memorial Hospital across the street. In fact, I remember I was lying on a gurney in the triage unit when I first noticed them. That’s strange, I thought. After I was transferred to a semi-private room a couple hours after arriving at the hospital, I told my nurse, Raveena, that I was having contractions. She felt my belly and agreed. She asked that I keep an eye on them.

Later, I was moved to the radiology department so that I could have an internal ultrasound to examine the length of my cervix more precisely. I think the radiologist who performed the scan could see how down and worried I was, because he was kind enough to tell me the results of the scan. According to him, my cervix measured 2.8 cm, which meant that it was still somewhat long. Almost instantly after the radiologist told me, I felt myself start to breathe again. The babies are  going to be fine. I was so relieved.

As the porter (who turned out to be our friend Robert) wheeled me back to my room, I remember feeling like everything was going to be okay. For now, I was to spend the night in the hospital so that I could meet with the hospital MFM in the morning.

That night, the contractions did not stop.

The following day, on February 26, 2016, I met with the hospital MFM, Dr. Grabowska. In her opinion, the internal scan the radiologist performed the day before was good enough that she didn’t need to conduct another internal scan herself. Overall, she was happy with the results. I then mentioned that I had been having contractions since the day before and she said she wanted to look at the babies to see if everything was okay.

Dr. Grabowska is a sweet woman and wonderful doctor. I think that being under her care the two times that we met made the most painful experience of my life just a little bit easier. Good, compassionate doctors do make a difference. I know, because Dr. Grabowska made a difference for me.

As she ran the transducer across my abdomen to listen to the babies’ heartbeats and examine their bladders and fluid levels, Dr. Grabowska sounded optimistic. “Everything looks good,” she said. Their heartbeats were good, their bladders looked excellent, and fluid levels were fine. The babies also seemed to be playing; baby A (Summer) was underneath her sister’s bum. Their discordancy rate was also within normal range, meaning that the difference in size between the babies wasn’t cause for concern. Dr. Grabowska was happy to say that there were no signs of twin-to-twin transfusion syndrome (TTTS), something that I had been worried about since my husband and I found out we were having identical twins that shared a placenta. 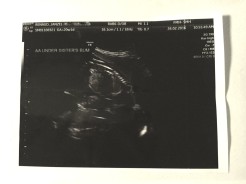 These are the last ultrasound pictures of the babies that we have. Taken on February 26, 2016.

This is the last ultrasound picture of Malia that we have. Taken on February 26, 2016.

Because I had reported having contractions since the day before, Dr. Grabowska gave me the option of having another internal ultrasound to make sure that the contractions weren’t causing my cervix to open. I don’t know of any woman that likes to have medical devices poking around in their nether region, but, out of an abundance of caution, I agreed to another scan. At the end of it, Dr. Grabowska was pleased to report that my cervix was between 2.9 and 3.2 cm. There was no need to worry. She suspected that the stress of being suddenly admitted to the hospital the day before was what brought on the contractions.

“Have you had these contractions before?”

“So the babies are okay?”

She gave me a smile.

“Everything is going to be fine, sweetheart,” she said. “The babies are okay.” And as Dr. Grabowska held my hand, tears streamed down my face. In that moment, her words were life to me.

I was discharged later that afternoon.

Looking back, I can’t help but desperately wish that things turned out just as Dr. Grabowska reassured me they would that day. The next time I imagined being in the hospital was when it was time to deliver the babies, probably sometime in June, but no later than their due date on July 14. Little did I know that I would be back there a week later, in that same exam room with Dr. Grabowska, and have to listen to her give me the most devastating news of my life. In the meantime, the sun was still shining on us.

4 responses to “Standing in the Sun”